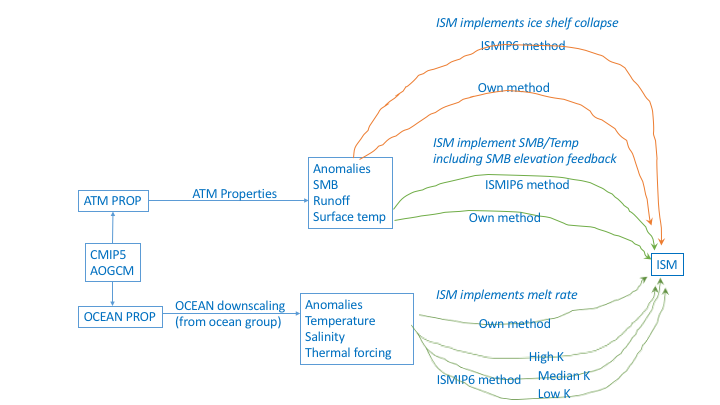 With the help of the atmosphere and ocean focus groups, six CMIP5 AOGCMs have been selected for ISMIP6 standalone ice sheet model projections. The table below lists the initial number of experiments based on the first three AOGCMs: MIROC_ESM_CHEM, NORESM1 and CCSM4. This table is the minimum contribution expected from ISMIP6 models. Modeling groups that can run many simulations are encouraged to explore the ice sheet response using three additional CMIP5 AOGCMs. Groups that have their own methods for implementing ocean and atmosphere forcing, are encouraged to do the suite with "open" experiments (1-4). Models that perform the "open" experiments can use the parameterization of their choice to simulate atmospheric and oceanic forcings, but these parameterizations must use the given CMIP5 GCM outputs. All groups are expected to contribute to the "standard" experiments. Depending on the results of experiments 3 and 7, which consider RCP2.6, additional AOGCMs may be suggested with RCP2.6 for models that are able to do many simulations, but these would be a lower priority than the completing the set of experiments with the 6 AOGCMs for the RCP8.5 scenario.

The control run ('ctrl') is needed to evaluate model drift. As in the initMIP setup, the control run is obtained by running the model forward without any anomaly forcing, such that whatever surface mass balance (SMB) and ocean forcing used in the initialization technique would continue unchanged. The other two initMIP experiments ('asmb' and 'abmb') also need to be repeated for each new model version.

aSMB(x,y,t) is constant over the entire year and changes stepwise at the beginning of every year.

ISMIP6 open approach is used sample a larger variety of oceanic forcing parameterizations, as it remains an active field of research. Models are free to continue applying the ocean forcing parameterization they used during the model initialization or their preferred method, but should still rely on the ocean forcing datasets provided by ISMIP6 to simulate future ocean conditions.